It seems a lot of users who upgraded to iOS 7 last month are having issues with iMessage. Apple’s Support Communities forums are full of complaints from disgruntled iPhone, iPad, and iPod touch users who cannot send or receive iMessages anymore, and you’ll find plenty of people voicing their frustrations on Twitter, too.

Initially it seemed Apple’s servers were the problem — as they often are when iMessage has problems — but that’s not the case. Instead, it appears to be a simple bug that can be easily rectified with a quick bit of tinkering. Here’s what you need to do.
This problem has been affecting users since iOS 7 made its public debut a couple of weeks ago, but MacTrast reports that it’s gotten worse since Apple released iOS 7.0.2 late last week. For many, iMessage works fine on a Mac, but it’s acting up on iOS devices. 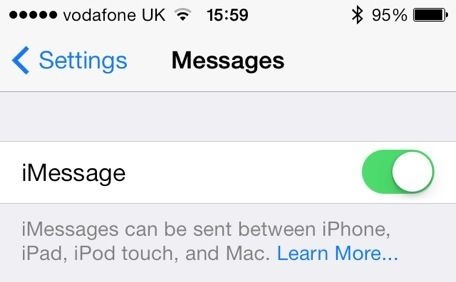 Fortunately, the fix is simple. If you’re experiencing the issue, here’s what you need to do:

1. Open up your Settings app and tap ‘Messages’, then disable iMessage by tapping the toggle

2.Go back into the main Settings screen, then tap ‘General’ and then ‘Reset’. Now tap ‘Reset Network Settings’ and confirm the process — you may have to enter your passcode if you have one set

3. Return to the Messages section and enable iMessage again

You iOS device will now be reactivated on the iMessage server, and any problems you may have experienced with sending or receiving iMessages should now be fixed.
You shouldn’t have had any problems if you’re using a brand new iPhone 5s or iPhone 5c, of course, because it would have come with iOS 7 pre-installed. The issues should only affect those who upgraded to iOS 7 from a previous version of the operating system.